RADNOR — What will happen when artificial intelligence (AI) links together, becoming smarter than the people who created it?

That is the premise of “Singularity 1.0,” a compelling new novel by Radnor resident George H. Rothacker. Rothacker, 72, is also an artist and has made his living as the owner of an advertising firm, Rothacker Advertising & Design, in Media.

While Rothacker, who paints in acrylic on canvass, has been an artist since childhood, “Singularity 1.0” is his first foray into science fiction. The book, which may be eerily prescient, is set in 2029 when AI makes contact with humans, causing consternation among government personnel worldwide. The characters in the book, aside from AI who is embodied by the mysterious Yellow Man, include a Catholic priest, a Buddhist monk, a woman who was born with no arms, a newspaper editor and an Irish lawyer.

Rothacker admitted that he did a lot of research into computer science, history and sociology, among other topics to ground the book in reality. The believability of the characters and situations, as well as his conversational tone, creates a haunting world that touches on religion and philosophy, as well as technology.

And Rothacker has illustrated his 286-page creation with his witty and whimsical drawings.
Rothacker’s father, also George, was something of a con man, who convinced people to buy oil leases, fought in World War II and was also an artist, Rothacker said.

“He’d say, ‘I’ve got a $500,000 in oil wells, it’s just tied up,’” said Rothacker. “And every Tuesday, instead of the money from the oil wells, he’d come home drunk without the rent … He was an ugly drunk but a nice man otherwise.” Later, in life his dad taught art at the Upper Darby Library and created thousands of postcards.

His mother, Marjorie, was a department store artist, making drawings for Wanamaker’s and Gimbel’s. The family lived in a hotel. Later they moved to Upper Darby, when his mom got a job playing piano in a cocktail bar.

Rothacker was “a poor kid” who studied drafting at Temple University but “hated being in the field.” So he tried other things and eventually, he became the head of an art department for A.J. Wood Marketing Services in Philadelphia.

In 1978, Rothacker started his own company. He borrowed $25,000 and bought his first Apple computer and related equipment, he said.

Rothacker and his wife, Barbara, who he calls “his muse,” moved to Radnor in 1984. Barbara Rothacker has her own communications design company and, he said, sometimes employs him.

“All this time I was also doing my own art and painting,” said Rothacker. In 1991 he did a poster for the Media Theater to raise money to reopen it, he said. While it did not raise enough money to reopen the theater, it did create some energy and funds toward it. That led to a series of posters for 14 area theaters, including the Colonial in Pottstown that he sold at the annual Blob Fest.

“They’d get half the money I made selling prints,” he said.
“Again over the years, I’d get them printed up and sell them,” he said. He also raised money for the Jimmy Stewart Museum in Indiana, Pa., and created a video biography of Jimmy Stewart called,
“Always be Nice to People.”

He got busy for a bit,” working on the house and the kitchen, stuff got in the away,” he said.
“Although I kept painting on occasion and … I started to go out and paint plein air (in the outdoors).
“After I did a few of them, Barbara said, ‘Why don’t you paint the Main Line? Why don’t you paint Radnor?’” So he did and had a show at the Willows in February 2005. Some 300 people came to his 75-painting exhibit and he sold $40,000 of work. He donated some money from it to the Radnor High School Scholarship fund. Rothacker’s daughter, Abigail, and stepsons, Kyle Emma and Wayd Emma, all graduated from Radnor High School. He also did 15 paintings of scenes of the island of St. John’s.

And then in 2006, he had a show of paintings of cars and trucks called “Memories of the Open Road, Lost and Found.” These were 36 paintings of various sizes that were shown at the Radnor Hunt Concours. His pictures were featured in a car magazine and “then I was known as a car artist,” he said. A car guy himself, Rothacker has restored a 1953 MG TD.

“Then I stopped painting cars (except for commissions),” he said. He did a series of painting with the theme of connectivity from Inner City Philadelphia to the Main Line.

He also had a show at Villanova University in 2016, of a variety of his paintings, he said, called “The Artistic Universe of George Rothacker.”

Of late, Rothacker has been painting portraits of rock ’n roll stars and writers. The musicians include Jerry Garcia of the Grateful Dead, Alice Cooper and Jimi Hendrix. Seventeen are on display at the Pennsylvania Distilling Co. in Malvern. They’ve also been shown at the Ardmore Music Hall.

“It’s a great deal of luck, timing, hitting a market,” he said. “There’s hard work, too.”
His portraits of writers include Kurt Vonnegut, James Agee, Anne Tyler and John Updike. He plans to exhibit those works and give a book talk and signing for the Delaware County Press Club in October.
Rothacker is most proud of a painting related to the famous Diego Rivera mural that was removed from the Rockefeller Center because of it touted of communism. That picture is in his studio.
“That’s the one I’m most proud of,” he said. “It took the most time.”

He also did a large painting of the Beatles' “Sgt. Pepper’s Lonely Hearts Club Band” album cover, which is currently hanging in the bar at the Belrose Bar & Grill in Radnor.
When not working or creating, Rothacker enjoys reading. And he’s already at work on a sequel, “Singularity 2.0.”

The novel, published by Outskirts Press, is available through www.singularitynovel.com and at Main Point Books in Wayne, as well as through Amazon and Barnes & Nobel. The Kindle version will be available Aug. 30.

Singularity 1.0 is now available for sale! 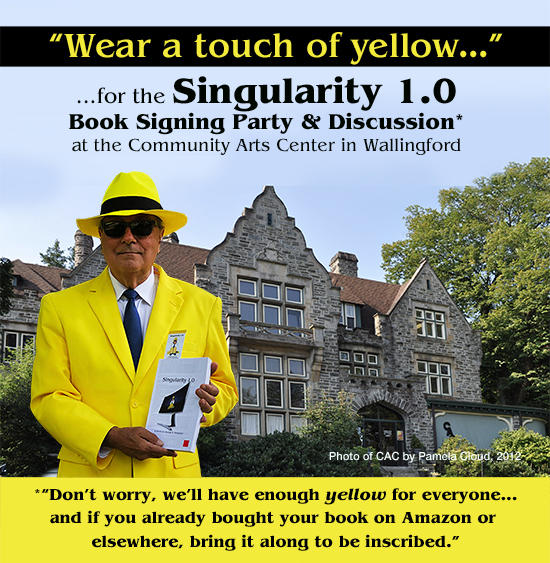 George H. Rothacker
Since 1978, George Rothacker has owned Rothacker Advertising & Design, a firm that today specializes in creating coordinated marketing campaigns using multimedia campaigns to creatively promote businesses and organizations throughout the country. He is the designer of the “Media – Everybody’s Hometown” logo, and the artist responsible for the Picture Palaces Calendar that raised money for the Community Arts Center, the Media Fellowship House, and the Delaware County Historical Society in 2003, and which featured his theater paintings including the Media Theatre. In addition to the videos he produces for businesses, Mr. Rothacker has produced several documentaries including, in 2005, a history of discrimination and diversity in the United States entitled “America in Black and White and Many Colors,” and in 2008, “Words of the Heart,” the story of Thomas Garrett and his great, great niece Dorothy Biddle James, both of whom fought for human rights throughout their lives. George will be having a retrospect of 45 years of work at the Villanova Gallery in May, 2016.